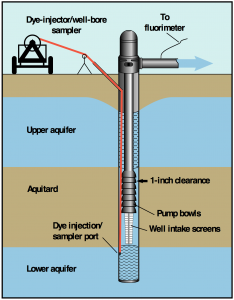 I talked to the operator of a small water district in California several years ago about an issue they were having with arsenic in their main supply well.  Water samples collected during non-pumping conditions or just at startup of the pump had arsenic concentrations that exceeded the EPA’s Maximum Contaminant Level (MCL), but once the pump was operating for a period of time, the arsenic concentrations consistently dropped to below the MCL.  He wanted to know the reason for the difference in arsenic concentrations during different well states.

In this case, they got lucky and did not really need to do anything other than make sure they pumped the initial higher arsenic water to waste when they started the pump.  In other cases, unfortunately, concentrations of naturally-occurring contaminants like arsenic and uranium exceeding the MCL can trigger a requirement for expensive treatment options, which can run into the hundreds of thousands or even millions of dollars for municipal systems, with perpetual annual operation costs tagged onto the capital costs.

The good news is, there may be a much less costly option than a treatment system.  That option involves vertical profiling of the well to identify the zones where the contaminants are present and the location of the zones that provide the greatest flow contribution to the well.  If the vertical profiling determines a zone contributing contaminants to the well does not contribute significantly to the production capacity of the well, a recommendation can made for well modifications which involves sealing off those high contaminant zones.  In many cases, these well modifications can eliminate, or at least reduce, the need for expensive treatment plants.

There are a number of different approaches to profiling wells out there and some techniques may work better in some geologic environments or well types than others. In all cases, though, the profiling should be able to identify the contaminant zones in the well, the most productive water producing zones, be able to determine whether well modifications can be made without impacting well production and calculate the levels of contaminants in the well after well modifications are made.

Tools of the Trade: Google Earth