Because it usually requires very little effort to collect the data necessary for the calculation of Specific Capacity, it is an extremely useful measurement that can be used to identify declines in well performance, which allows for planning an optimal well rehabilitation schedule.  The Specific Capacity of a well is the pumping rate (gpm) (Q) divided by the drawdown in feet (s). Specific Capacity can also be used to provide the design pumping rate or maximum yield for the well and to estimate the transmissivity of the surrounding formations penetrated by the well screens.  The following equation is used to calculate Specific Capacity: 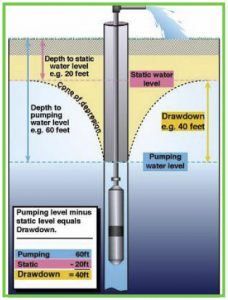 Typically, a well should run continuously for at least 24 hours at a constant yield before recording the drawdown to allow drawdown to stabilize (Driscoll, 1986).  Ideally, to provide the best comparison of Specific Capacity measurements over time and a comparison to the original test results, the same continuous pumping time frame should be used for each subsequent test.

The Specific Capacity obtained just after a well is drilled and properly developed is typically the highest value that will be produced and is the baseline for comparison for all future values.  As time goes by, the Specific Capacity will decline as plugging of the well’s perforations or filter pack occurs or as static water levels change.  Specific Capacity testing should be performed at least semi-annually and water levels (static and pumping) should be collected monthly to provide early detection of potential well problems.  Rehabilitation work should be scheduled when a well’s Specific Capacity drops by 15% or more.

A new well will start to lose Specific Capacity as soon as it starts pumping.  The rate of decline will vary from well to well, a good record tracking system will allow declines performance to be tracked so that an optimal schedule for well rehabilitation can be established.  The Specific Capacity of the well can be tracked, along with other important measurements, using a series of Key Performance Indicators (KPI) that allow easy recognition of well performance trends through a series of time-series graphs. 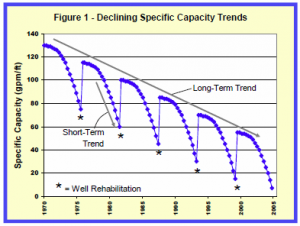 There is also evidence that Specific Capacity can be affected by changes in the temperature of the groundwater.  This effect is most notable in wells that are located in an aquifer which is directly under the influence of surface water and experiences seasonal temperature changes.