We see many wells, including new ones, that are not performing as they should, with specific capacity and well efficiency much lower than they should be for the hydrogeological conditions.  It can often be a bit of mystery why these wells do not perform as well as they should.  Our experience has been that many times the answer lies with incomplete well development. 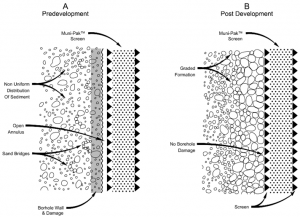 The well development process is an important part of establishing a well that produces at its maximum capacity, but can often be an afterthought during the well drilling and construction process.  The process of well development is really just a series of techniques to repair borehole damage caused by the drilling, remove drilling mud and establish as clear a flow path for groundwater to move the well as possible.  Well development can be as simple as using a surge block and air lift system to remove the drilling debris from the well, filter pack and surrounding formation, but drilling mud can be tricky to remove, especially when a significant volume gets lost into the formation, and it can require extra effort to recover it in those cases.  Dispersants and chlorine can help with recovering bentonite based drilling mud out of the formation. Screen size, filter pack, formation characteristics and other factors all need to be accounted for when implementing effective well development.

Where well development can go wrong is with a lack of proper measurement techniques that should be spelled out in the drilling contract.  Well development should continue beyond just obtaining clear water if there are still sanding or turbidity issues, if specific capacity is seeing improvement each time it is measured and if well efficiency is still showing improvement, as well.  By having measurable standards for well development in the drilling contract, it becomes a “no negotiation” issue and the development process must continue until those standards are met.

Examples of measurement standards during well development can include:

Sand: Measure sand using a Rossum Sand Tester.  Sand content shall average not more than 5 mg/L for a complete pumping cycle of 2-hour duration when pumping at the design-discharge capacity.  No fewer than 10 measurements shall be taken at equal intervals to permit plotting of sand content as a function of time and production rate and to determine the average sand content for each cycle.

By having clearly measurable standards for well development in the drilling contract, it becomes a “no negotiation” issue and the development process must continue until those standards are met.