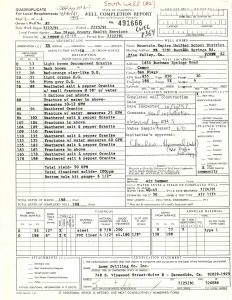 One of my first stopping points when I am trying to figure out what ails a well is the driller’s log. There can be a lot of clues there as to potential problems in the well and it is certainly a lot cheaper to review a driller’s log than it is to jump into a bunch of expensive diagnostic tools.

In the past, we always used to think that many driller’s logs were completed in the bar after about three or four beers, but they have gotten a lot better over the years, for which I am thankful.  In the many cases where the driller may not be around anymore, the information contained on the driller’s log may be the sole record of what happened during well drilling and construction.

While the well construction details can be extremely useful, we have tracked down a lot of problems over the years just based on a few notes the driller has put on the log in addition to the required well construction information.  In one case, we were able to identify issues that were causing E. coli hits in several wells in a well field on the basis of notes on one well log that noted lost circulation zones at approximately the depth of the bottom of the seal, which resulted in a conduit along a surface fracture zone that resulted in surface water intrusion into the well.  Since this well was located in an area surrounded by septic systems, shallow groundwater impacted by E. coli was finding its way into the wells via the fractures.  Ultimately, the answer was to drill new wells with deeper seals.  Without those notes on that one driller’s log, we would have been challenged to find the cause of the problem without an expensive investigation.

Sometimes we take driller’s logs for granted, but we should never underestimate their value as an initial diagnostic tool for evaluating a well.