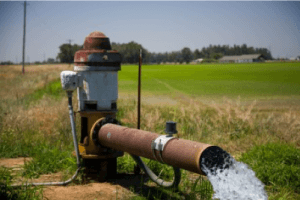 Although agricultural wells are often constructed in similar ways to municipal wells, their operational pattern is likely to be seasonal, which can result in maintenance issues caused by plugging, especially with iron-related bacteria (IRB).  Related to IRB are sulfur-reducing bacteria (SRB) which do not occur by themselves, but together with the IRB, so dealing with the IRB problem will also deal with the SRB problem.  Wells that are used heavily during spring and summer are often idled in the fall, which can result in ideal situations for IRB growth in the well and eventual reduced performance due to plugging.  SRB can present a danger for corrosion.  Simple maintenance procedures can substantially reduce the potential for IRB and SRB.

There are really two aspects to dealing with an IRB issue. If well performance is degraded due to IRB, then well rehabilitation is necessary.  When a substantial IRB population is present, chlorination will not be effective in removing it due to the biofilm present that protects the bacteria themselves.  Chlorination may remove some of the biofilm, but it often will not kill or remove much of the actual IRB.  Organic acids such as acetic or glycolic acids have antibacterial properties and can also be used to remove oxidized iron products associated with IRBs. Brushing and swabbing should be combined with the chemical treatment to effectively remove the IRB.

Once the well rehabilitation is successfully completed, IRB can be discouraged from coming back by a maintenance program of shock chlorination – often done once per year in the fall when the wells go idle for the winter.  The object of well chlorination for annual maintenance purposes is to raise the chlorine level in the well to around 500 ppm and hold it there for at least 24 hours to allow the chlorine to attack and kill the bacteria. Be careful to avoid overuse of chlorination as the IRB can actually become acclimated to it and it will lose its effectiveness over time.

Operationally, the well operator should avoid pulling the water level down below the screen and/or pump intake to avoid pulling in air which can oxygenate the well water and produce a more favorable growth environment for IRB growth.

To monitor potential well plugging issues, the following parameters should be routinely tracked: pumping rate, static water level, pumping water level, drawdown and specific capacity.  Trends in these measurements can often provide a good indication of when plugging is occurring in the well.

The True Cost of a Well