All wells will experience performance declines over their lifespans, some wells more rapidly than others.  For instance, wells in alluvial deposits, while generally more productive than bedrock wells, tend to be more prone to well performance issues and require more frequent rehabilitation as a rule.  The major causes of reduced well performance tend to fall into three major categories as follows:

Filter Pack Plugging:  Wells typically have a one way flow of groundwater into the well which, over time, results in the migration of fine-grained material such as silts and clays into the filter pack, the accumulation of which eventually impedes groundwater flow into the well.  Smaller sand particles can often form sand bridges for the same reason.  All these situations result in increasingly inefficient flow of water into the well and even full plugging of sections of the filter pack in some instances. 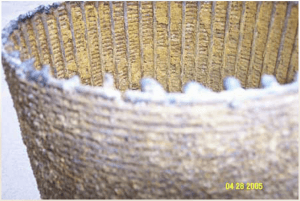 A Note on Open-Hole Bedrock Wells: Open-hole bedrock wells are not immune from developing well performance issues over time.  Iron-reducing bacteria can still be an issue.  Mineral incrustations usually take the form of deposits which can reduce the size and productivity of the fractures that supply water to the well.  Over time, productive factures can squeeze down due to overlying rock pressure, reducing groundwater flow through those fractures.  Due to the volumes of water that can pass through the fracture and solution channels in karst areas, silt and clay accumulations can cause plugging to the point where flow is reduced.

Keep in mind that some or all of these problem situations can occur in a well at the same time, so it is important to use proper diagnostic tools to determine the full cause of reduced well performance before deciding on a course of action for well rehabilitation.

The True Cost of a Well

It’s Not Business As Normal!