On the face of it, it would seem that bringing as much water as possible into a well as fast as possible would be a good thing, however that does not hold true in well design.  Recommendations for maximum well entrance velocity range from 0.1 ft/sec (Driscoll, 1986) to 1.5 ft/sec (AWWA, 2015).  At high entrance velocity rates, there is high friction loss and turbulent flow develops at the well screen which causes an increased potential for mineral incrustations and corrosion.  Turbulent flow also reduces pump efficiency and results in lower overall well efficiency due to head losses at the screen.  In reality, entrance velocity is a balancing act between screen length, well diameter, screen open area and aquifer thicknesses and empirical evidence indicates that efficiencies do not increase significantly above a well screen percentage open area of 3-5% (Roscoe Moss Company, 1990).

Average entrance velocity is calculated by taking the well yield divided by total area of the screen openings as follows: 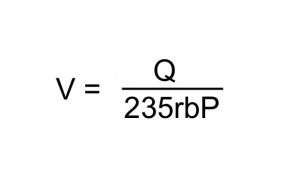 r = radius of well screen (in)

b = length of well screen (ft)

The screen open areas per foot vary by screen type and diameter and can be provided by the screen manufacturer.

The Importance of Proper Well Development