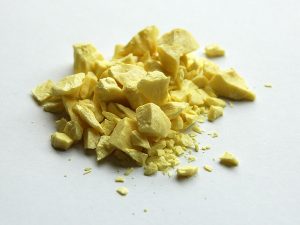 The Tennessee Department of Environment and Conservation estimates that 20% of all wells in the Central Basin area of Middle Tennessee contain varying levels of sulfur, readily recognizable to the nose as the “rotten egg” odor that many people are familiar with.  While the sulfur can be often be removed from the water though a variety of treatment systems, the question is, where does the sulfur come from in the first place?

The presence of sulfates in groundwater can also induce the growth of colonies of sulfur-reducing bacteria, which use the sulfate as a food source and then produce hydrogen sulfide gas as a by-product.

Petroleum deposits have associated sulfur-containing compounds that can also contribute to hydrogen sulfide gas concentrations in water wells.  Many geologic quadrangle maps in Tennessee include information on oil test holes and where they had any shows of oil and/or gas which could be indicative of potential sulfur in the groundwater in that formation and area.

In the Central Basin, water that is present within the higher flow, dynamic system of channels and other karst features is relatively fresh, while water present in lower flow, non-dynamic system is generally higher in dissolved solids, including sulfur compounds. The source of these high dissolved solids, including sulfur, is thought to be water that has been in contact with evaporite (gypsum and anhydrite) beds in the overlying Fort Payne Formation of Mississippian age.  Near the Highland Rim escarpment, the confining bed of Chattanooga Shale has been breached, and the more mineralized waters of the Fort Payne Formation recharge the Central Basin aquifer system and resulting in water with higher dissolved solids in areas with lower flow rates.

The Mississippian limestones of the Highland Rim can also contain significant sulfur in places, mainly derived from sulfate compounds in evaporite sequences in rock units such as the Fort Payne formation.  The gypsum and anhydrite sulfate minerals would be expected to dissolve under dynamic flow conditions, so, similar to the Central Basin aquifer system, active flow areas are the key to good quality water on the Highland Rim, with poorer quality water found in the lower flow areas.

Pennsylvanian sandstone aquifer on the Cumberland Plateau can contain sulfate and hydrogen sulfide in places.  The sulfur in these areas derives from where groundwater flow encounters shale and sandstone that contains pyrite or concentrations of ferrous or sulfurous compounds.  These areas are often associated with coal beds and related rock formations.

Tennessee groundwater quality can be highly variable, based on both flow rates in the subsurface, the presence of sulfate compounds in the surrounding or overlying rock formations and the presence of mineral deposits such as petroleum or coal, that may have associated sulfurous compounds.  The key to locating a well with good water quality is to understand the geologic conditions in the area and locate the well accordingly, if possible.

Sometimes, There Is Just Not Enough Water