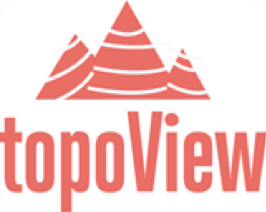 Historical topographic maps are available in four formats on the TopoView web site:

GeoPDF  – This is the standard format for digital topographic maps from the USGS.  Maps are in a PDF format that can be read by any PDF reader, but also are georeferenced so that they can be directly imported into Geographic Information System (GIS) software.  The GeoPDF format provides accurate map scale and is the most faithful digital representation of the original paper topographic maps.

GeoTIFF – The GeoTIFF files are a compressed, 300 dpi TIFF image format, with embedded georeferencing information so that the map can be used directly in GIS software. Like the GeoPDF, GeoTIFFs are generated at true scale, allowing users to plot the map at the intended map scale in cases where a hard copy is needed.

JPEG – High-resolution JPEG format files are useful for getting a quick view of the map in order to find place names or simply explore the map area without the need for downloading a large file.

KMZ – The KMZ format is a compressed form of the KML format which is used for displaying the maps in Google Earth.  The KMZ files are georeferenced so they will open in Google Earth in the correct location, allowing the user to add overlays of geology and other maps that can aid in exploration for water.

Different formats are useful in different cases or in different software programs, the GeoPDF is going the be the most useful format in most circumstances.

To access the USGS TopoView historical topographic maps, use the following link to the introduction page that explains how to best use the web site: https://ngmdb.usgs.gov/topoview/.

Where Does The Sulfur Come From in Tennessee Groundwater?