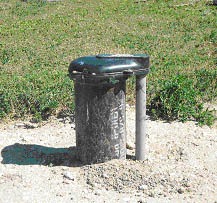 We see many cases of well problems that are directly attributable to surface water intrusion in the wells.  These problems can range from coliform bacteria (including E. coli) to nitrates to increases in turbidity after rainstorms.  Many of these problems can be traced to damaged or inadequate well seals.

State regulations often specify a minimum surface seal depth for water wells.  In actuality, well seals may need to be extended deeper than the minimum due to the presence of fracture zones or other geologic that can extend deeper and allow surface water to enter the well.

Groundwater Under the Direct Influence of Surface Water (GWUDI) is a category of groundwater that is directly hydraulically connected to surface water.  An example would be a water supply well screened in an alluvial aquifer immediately adjacent to a stream.  In many states, GWUDI is classified as surface water, so surface water rights would apply, not groundwater rights.  So how can we tell if we are dealing with a GWUDI situation? Increased levels of coliform bacteria and turbidity over a few days following a significant rain event is considered to be direct evidence for a connection to surface water.  Usually where there is a surface water connection, these samples will show an initial increase in coliform bacteria after the rainfall event, tapering off as the surface water influx flushes through the system.

The same situation holds for water supply wells that have failed or inadequate seals and are experiencing surface water intrusion.  After significant rainfall events, the presence of coliform bacteria will be noted, often accompanied by an increase in turbidity.  For situations with shallow groundwater-derived contaminants such as nitrates, concentrations of these constituents may spike after a rainfall event until they taper off back to normal.  Often little monitoring is done of these situations, so the data may not be readily available to assess surface water intrusion (with the possible exception of turbidity), unless it is suspected and specifically being evaluated.

Both damaged and inadequate seals can result in surface water intrusion into the well and possible unhealthy water quality, especially after rainfall events.  To determine the adequacy of the seal, a good starting place is the driller’s log to determine if any shallow fractures or other geologic conditions were encountered that could lead to surface water intrusion. Tools such as a cement bond log or gamma-gamma log can be used to evaluate the presence of voids in the cement seal behind the casing, if a failed seal is suspected.  When drilling a new well, if is important to evaluate the proper seal depth based on geologic conditions to avoid surface water intrusion and possible unhealthy well conditions.