The well seal, also known as a sanitary seal, is an important component of a water well that protects the well from surface water contamination and provides protection for the upper part of the well.  The seal consists of a mixture of cement, bentonite and sand that is placed to make a water tight seal in the annular space between the casing and the borehole wall. 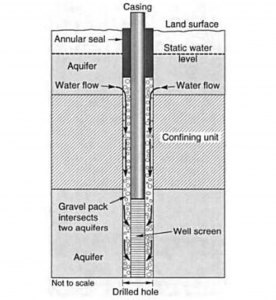 Minimum seal depths specified in the regulations are just that – a minimum depth.  It is important to take the geology of the borehole into consideration when determining the actual depth of the seal.  Fractures in bedrock and wells screened across multiple aquifers can result in an inadequate seal, even if it meets regulatory requirements

We find that many water quality issues impacting PWS wells often have a surface water component – especially in cases of nitrates and E. coli.  Often the surface water intrusion can be traced to an inadequate seal that, while it meets the minimum regulatory standards, does not seal the well against surface water intrusion based on a number of geologic factors.  For instance, we were consulted on an E. Coli contamination issue in several PWS wells in a volcanic bedrock and, after examining the well logs, determined the 50 foot seals to be inadequate due to shallow lost circulation zones encountered during drilling that we not adequately sealed off.  This allowed intrusion of surface water containing E. coli from surrounding properties with septic/leach field systems.  In another case of nitrates impacted a well drilled into a fractured granite, a review of the well logs again revealed a seal that met minimum regulatory requirements did not address shallow fracture zones that extended to 70 feet below the ground surface and allowed intrusion of nitrate impacted surface water into the well.  In either of these cases, an adequate seal could have been installed based on geologic information available at the time of drilling, but a decision was made to not use the available information and just to install the minimally acceptable seal according the regulations.

An inadequate seal resulting in impacts to well water quality can be very expensive in terms of required treatment of the impacted water or drilling of a new, properly constructed well.  Our philosophy is that it is best to construct the well properly in the first place and that usually means have both an adequate geologic log of the borehole and a geophysical log, as well.